It seems that holidays get me inspired in the kitchen, but I think Halloween and Thanksgiving have a cool crossover with food, decor, and costume. I was just perusing my last couple of Halloweens through my google photo cloud and realized it is time for an update to this post (originally published in 2015).

My costume. This one was a planned costume, which I rarely do anymore. However, in 2017, we were invited to a costume party and we knew that the costumes were going to be amazing. On top of that, I actually had an idea months ahead: The Swedish Chef. See how perfect that is for a Swedish girl who loves both cooking AND MUPPETS?!!!

On to the other fun from 2017. Jack-o-Lanterns always get carved at my house. No skipping it. I believe that no matter how few trick-or-treaters, it is my duty as an adult to help kids get childhood experiences. Plus I like carving so who am I really fooling?

In 2017 I made stuffed peppers with Jack-o-lantern faces for dinner after we handed out candy. You can fill them with all kinds of stuff…but cheese is important because it gets gooey and that’s where the barfing pepper fun resides. I stuffed my peppers with taco contents. Cheese, rice, refritos, taco meat, onions, and so on. Maybe next year I’ll do a full blog post about these and experiment more, but my first crack at them turned out delicious and Halloweenishly gross. 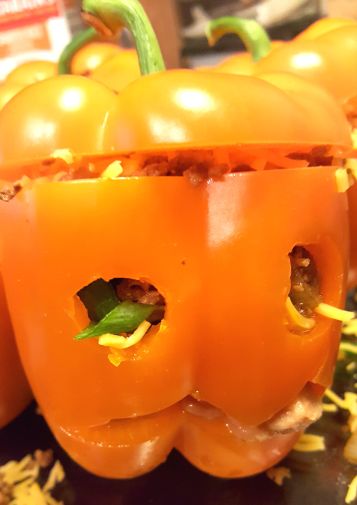 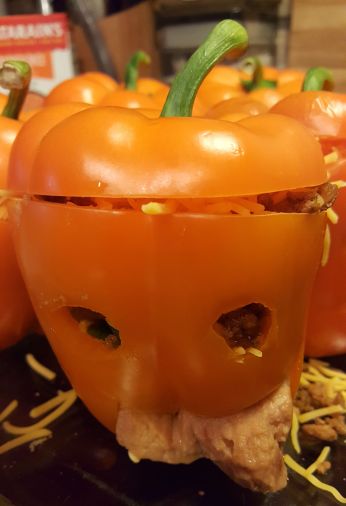 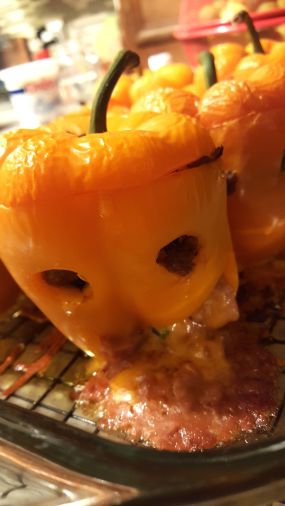 In 2016 my costume came together at the last minute. We’ve got that big old box of decorations and costumes mixed together. So I don’t know what you’d call it, but this is what I wore. I’m gonna say I was Queen of the Ravens? 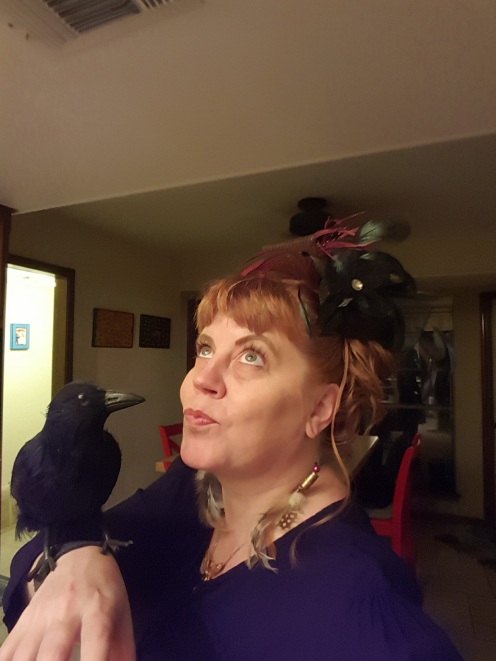 Onto the Pumpkins! Not only did I carve with my husband as usual, but I learned a cool new project from my crafty mom: fabric pumpkins with real pumpkin stems. These are so simple and easy and pretty. The biggest challenge is finding stems to use, and then drying them in a low oven temp to get the bug/bacteria-free and ready to attach.

And here are the Jack-o-lanterns:

The first two were done a bit early, as you can see. They rotted a bit by Halloween day so we had to go for round two, and my husband (or was it me??? I can’t recall) went rogue and re-purposed one of the rotten pumpkins for the display of the second round.

Dinner 2016 was my Chipotle Pumpkin Soup from the first cookbook I wrote and published (The Soup Pot). Simple as you can get to make, and so delicious.

As Fall approaches, I’m already excited about all the fun projects and cooking. Meet my applehead witch doll from last Halloween! I carved her from, I believe a Fuji. That is my best guess, as those are my favorite eating apples, so I tend to have them around, especially in the Fall. 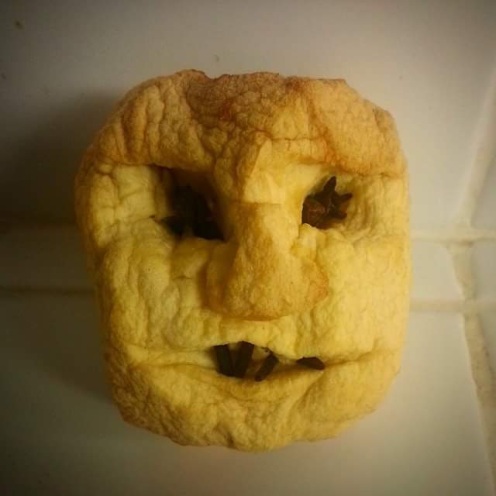 Behind her in the photo above are gourds that I bought at Wildseed Farms last Fall out in Fredricksburg, TX….which also happens to be wine country!

Here I’ve shown our little friend with a gaggle of Halloween and Fall goodies. A small pumpkin, which I later carved, an apple (everyone needs friends!), a bowl of candy ready for the Trick-or-Treaters, and a Candy Corn Candle, which I made and brought as a hostess gift to my friend who threw a costume party.

What traditions do you have during the Halloween season?